The time is 1906; the place, a tiny plot of land in the Oklahoma territory. Old Henry (Tim Blake Nelson) is farming the land and raising his ornery teenage son Wyatt (Gavin Lewin). The boy considers his father a tyrant and wants to leave the place and experience a wider world. With no mother to mediate between them (she died of tuberculosis), their days stretch into tedious work getting food for the pigs and tending the dry land. 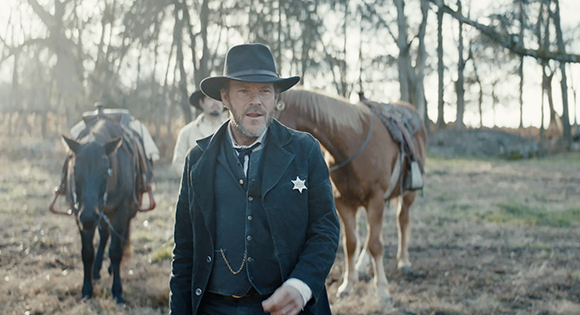 Henry is a humble and hard-working man who simply wants to make a living and protect his son. But this peaceful life is shattered when he comes across a wounded cowboy (Scott Haze) and a satchel filled with cash. Before long a posse led by a foul-mouthed lawman (Stephen Dorff) shows up. Henry doubts who they are and decides not to reveal he is sheltering the man they are seeking. All hell breaks loose when they return, and Henry proves to be a surprisingly good gunman. 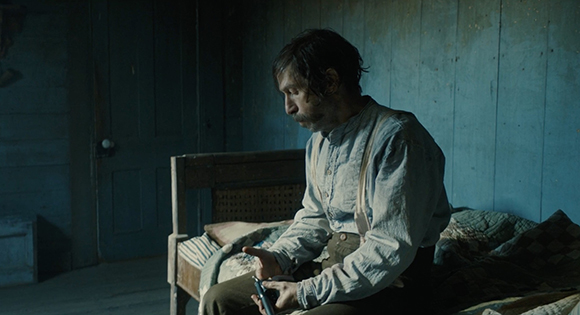 We enjoyed Nelson’s entertaining roles in O Brother, Where Art Thou? and The Ballad of Buster Scruggs, both directed by Joel and Ethan Coen. Here director Potsy Ponciroli fills the screen with plenty of action, reminding us of other gunslinger movies. She agrees with Nelson who calls the film “a micro-Western.”

Old Henry taps into the mystery and the malevolence of secrets and the yearning for security. Both can build walls around people, preventing even family members from really knowing each other. Many Western movies explore this moral turf and Old Henry does so with a sobering intensity.

“I grew up a-dreamin of bein’ a cowboy
And lovin’ the cowboy ways
Pursuin’ the life of my high-ridin’ heroes
I burned up my childhood days
I learned of all the rules of the modern day drifter
Don’t hold on to nothin’ too long
You take what you need from the ladies, then leave them
With the words of a sad country song
My heroes have always been cowboys
And they still are, it seems
Sadly in search of, but one step in back of
Themselves and their slow movin’ dreams.

“Cowboys are special with their own brand of misery
From bein’ alone too long
You could die from the cold in the arms of a nightman
Knowin’ well that your best days are gone
Pickin’ up hookers instead of my pen
I let the words of my youth fade away
Old-worn saddles and, old-worn out memories
With no one and no place to stay.

“My heroes have always been cowboys
And they still are, it seems
Sadly, in search of, but one step in back of
Themselves and their slow-movin’ dreams.”

This song, written by Sharon Vaughn, became a hit in 1975 when it was recorded by Waylon Jennings. It was again popular when Willie Nelson recorded it for the soundtrack of The Electric Horseman. For us, this poignant ballad speaks to our hearts with its portrait of the loneliness of those high ridin’ loners with their “own brand of misery” and their “old-worn out memories” and their “slow-movin’ dreams.”

Movie heroes these days tend to be comic book characters with superpowers and seemingly impossible missions to save the human race. We much prefer the heroes of classic westerns: like the ragtag cowboy (Jeff Bridges) in True Grit who helps a teenage girl get justice, the humble farmer (Tim Blake Nelson) in Old Henry who just wants to raise his son and keep trouble at bay, the retired horse trainer (Clint Eastwood) in Cry Macho who takes on the task of mentoring a young Mexican boy, or the Civil War vet (Tom Hanks) in News of the World who assumes responsibility for an orphaned girl. For some Western adventure and heroes, we recommend: