INTJ vs INFJ: 7 Main Differences Between These Personality Types

According to the Myers-Briggs Type Indicator, there are sixteen different personality types.

This way of classifying personality types was first developed in the early 20th century and aims to give us a deeper understanding of how each personality works with the world around them.

In this article, I will be looking at INTJ vs INFJ.

We will look at the main differences between these two personality types, their strengths, and their weaknesses.

Before we get into INTJ vs INFJ, I will briefly define each personality type and their main characteristics.

People with an INTJ personality type are creative and logical, with a strong passion for knowledge and learning.

They are introverted and don’t rely on the company of others to feel fulfilled.

They are hardworking individuals who love to master skills that interest them.

Furthermore, they like things ordered and controlled, and they are often perfectionists.

Those with the INFJ personality type are idealists who always stand up for what they believe in.

They are compassionate and enjoy helping others, even though they are pretty introverted.

They listen to their emotions to guide them, but won’t act irrationally. They like to plan things and stay organized in their lives.

INTJ vs INFJ: The Key Differences

Now we know the definitions of both personality types, we can dive deeper into INTJ vs INFJ and what the key differences between them are.

They are pretty similar personality types, as they both value organization and deep thinking.

However, there are some big differences between the two in how they interact with the world around them.

Both INTJs and INFJs are good at listening, but INFJs can be overly sensitive to criticism.

As they are emotion orientated, they often find it hard to accept criticism, even if it comes from a good place!

In contrast, INTJs handle criticism well and actually welcome it into their lives.

As they seek to use information to understand themselves and the world around them, they will typically use criticism to their advantage.

Another INTJ vs INFJ difference when it comes to their strengths and weaknesses is INTJs will often avoid talking about their emotions.

Unlike INFJs, they don’t view emotions as being that important and tend to value logic instead.

This can cause issues in relationships with friends and family members for INTJs.

Sometimes they will be viewed as insensitive to others in arguments and debates.

INFJs on the other hand are typically viewed as warm and friendly, open with their emotions, and wanting to help those around them.

INTJs are perfectionists, and this is a great strength to them.

Yes, they might take longer than others to achieve a goal, but they value hard work and will know what to do in order to achieve what they want.

In contrast, INFJs will typically have very high expectations and sometimes not think rationally about a goal that they want to achieve.

They are idealists, which can be a good thing. However, it does sometimes cause issues for them.

Whilst INTJs are perfectionists who work hard to achieve their goals, INFJs idealism means that there is a risk of them getting ahead of themselves and not putting the hard work in that is necessary.

When it comes to romantic relationships, INTJs and INFJs differ vastly.

Because the main difference in INTJs vs ENFJs is how they deal with emotions and those close to them, they both behave pretty differently in romantic relationships.

INFJs are emotional people, valuing empathy and helping others.

They crave deep emotional connections and work hard on forging these connections with those in their lives.

In romantic relationships, INFJs are open and honest partners.

They speak about their true feelings and allow themselves to develop strong bonds with those around them.

In contrast, INTJs are much more reserved when it comes to talking about their emotions.

They don’t really like opening up and view romantic relationships just as they see any other problem to solve.

Their rational thinking can cause upset in romantic relationships, firstly because they might come off as uncaring to their partners.

Furthermore,  INTJs hate it when other people don’t think as rationally as they do (and this is pretty common when it comes to love!).

INFJs sometimes can be irrational when it comes to love, and this is a big difference between them and their INTJ counterpart.

Where INTJs value logical thinking, INFJs will sometimes throw themselves in a romantic relationship, being idealistic about the future of the partnership.

People with an INFJ personality type will often want to please their friends and take pride in listening to those close to them and acting accordingly.

INFJs value helping others and will frequently go above and beyond for their friends and loved ones.

They do not have many friends, but the friendships they have are extremely meaningful to them.

INTJs are similar in this respect, but they differ in what they value in friendships.

INTJs aren’t keen on small talk, preferring to spend time with those who wish to discuss the big issues of today and philosophical theories.

INTJs are much more independent than INFJs and don’t need the support of others to feel fulfilled.

They will never waste time on people that do not stimulate them intellectually, and this means that they can sometimes be difficult to connect with.

They rarely discuss their emotions, and this can be an issue with friends.

Although INFJs don’t mind being alone, they do need supportive emotional connections with others to truly flourish.

In contrast, INTJs won’t particularly have long-term friendships, and sometimes see their friends as mere acquaintances that they talk to from time to time.

This suits them, as they are often too busy working on their skills and goals to forge deep connections with their friends.

When it comes to parenting, there are a few key differences between those with an INTJ and INFJ personality type.

When INTJs become parents, they will sometimes struggle to fully relate to their child.

They are rational people, and might get a bit confused when their child is not acting rationally!

They are also a bit shy when it comes to showing their emotions, and this might be difficult when they first become a parent.

However, they love to learn new skills, so will throw themselves into parenting and helping their child develop their cognitive and problem-solving abilities.

They will soon learn how to open up with their child and understand how to communicate their emotions with them in a healthy way.

INTJs want their children to be independent and learn about the world around them, and will never shelter them from the truth.

In contrast, people with an INFJ personality type will often be totally devoted to their children and wish to protect them at all costs.

They may shelter their children from issues in the world and within the family unity.

They will always shower their child with love, wanting them to know that they are adored and important.

Unlike INTJs, INFJs will always know how to deal with their children’s emotions in a supportive way.

They are more open and honest with their children about how to understand and work with their emotions.

When it comes to career paths, the INTJ vs INFJ differences are pretty interesting!

Both like to work in a structured and organized way, but the types of work they thrive in differ vastly.

This is because of their main difference: logic vs emotions.

INTJs are much more business-like when it comes to work, so do well in logical and detailed-oriented careers.

They strive to be the best in their field and do whatever it takes to get to the top.

If this isn’t the case, they can run into conflict in their workplace.

Career paths that are perfect for INTJ personality types are:

Despite INFJs also enjoying structure and methodology, they won’t do well in careers that are particularly analytical.

Because they are driven by their need to help those around them, they will thrive in careers that let them do that.

People with the INFJ personality type are naturally introverted, so this means they will struggle with careers that demand them to be outgoing.

However, they enjoy careers that allow them to connect with individuals on a deeper, meaningful level.

Because of this, INFJs will often have careers that allow them to have a positive impact on the world around them.

Career paths that are great for INFJs include:

So now we know what career paths are best for both INTJ and INFJ personality types, we can look at the differences between how each type behaves at work.

Both enjoy structure in the workplace, but this is probably their only similarity.

Because INTJs are more analytical and INFJs more holistic, they differ greatly in their workplace habits.

Those with an INTJ personality type are perfectionists when it comes to their work and therefore tend to take as much time as they need on certain projects.

In contrast, INFJs will approach work in a much more creative way.

Those with an INFJ personality type will take time on a project if needs be, but they will enjoy the experience much more than an INTJ.

Rather than concentrating on the end goal, INFJs will value the process of their work.

Another huge difference between INTJs and INFJs when it comes to work is how they interact with their colleagues and bosses.

INTJs are naturally independent and sometimes find it difficult when there are people above them, telling them what to do.

They do not accept being subordinate, especially if they don’t respect their boss.

INTJs are strong-minded and will speak up if they disagree with their coworkers and bosses.

This might cause friction within the workplace. Sometimes it is best for an INTJ to just be quiet and let things slide.

But, this is pretty difficult for them!

However, when it comes to INFJs, they actually thrive under strong leadership.

If their boss values the same thing that they do, they excel in the job.

They rarely cause unnecessary arguments within the workplace and value teamwork.

Those with an INFJ personality type will often be well-liked and respected by their colleagues, always going the extra mile for those that need it.

This means they are an important part of their team at their workplace.

Because of the similarity of the two personality types, you may think that their values are pretty similar.

However, when it comes to INTJ vs INFJ, they actually have vastly different values.

Those with an INFJ personality type put great value in helping others and strive to do what is morally right.

They aim to make the world a better place, and work hard to achieve this!

INFJs rarely value material gain, understanding importance in the world in a much more abstract way.

They are idealists, valuing dreaming big and helping society work better together.

In contrast, those with an INTJ personality type put great value on knowledge and intelligence.

They are driven by their wish to be masters in their field and put great emphasis on the strength of their minds.

Both the INTJ and INFJ personality types are really interesting, with amazing aspects of their personalities.

Both bring so much to the lives of those around them, wishing to create a better future.

When it comes to INTJ vs INFJ, there is no real winner.

They both have great characteristics, but both have things they need to work on!

The world needs people of all different personality types to create a harmonious and positive society.

If you want to learn more about other personality types check out our other articles here. Enjoy ❤️. 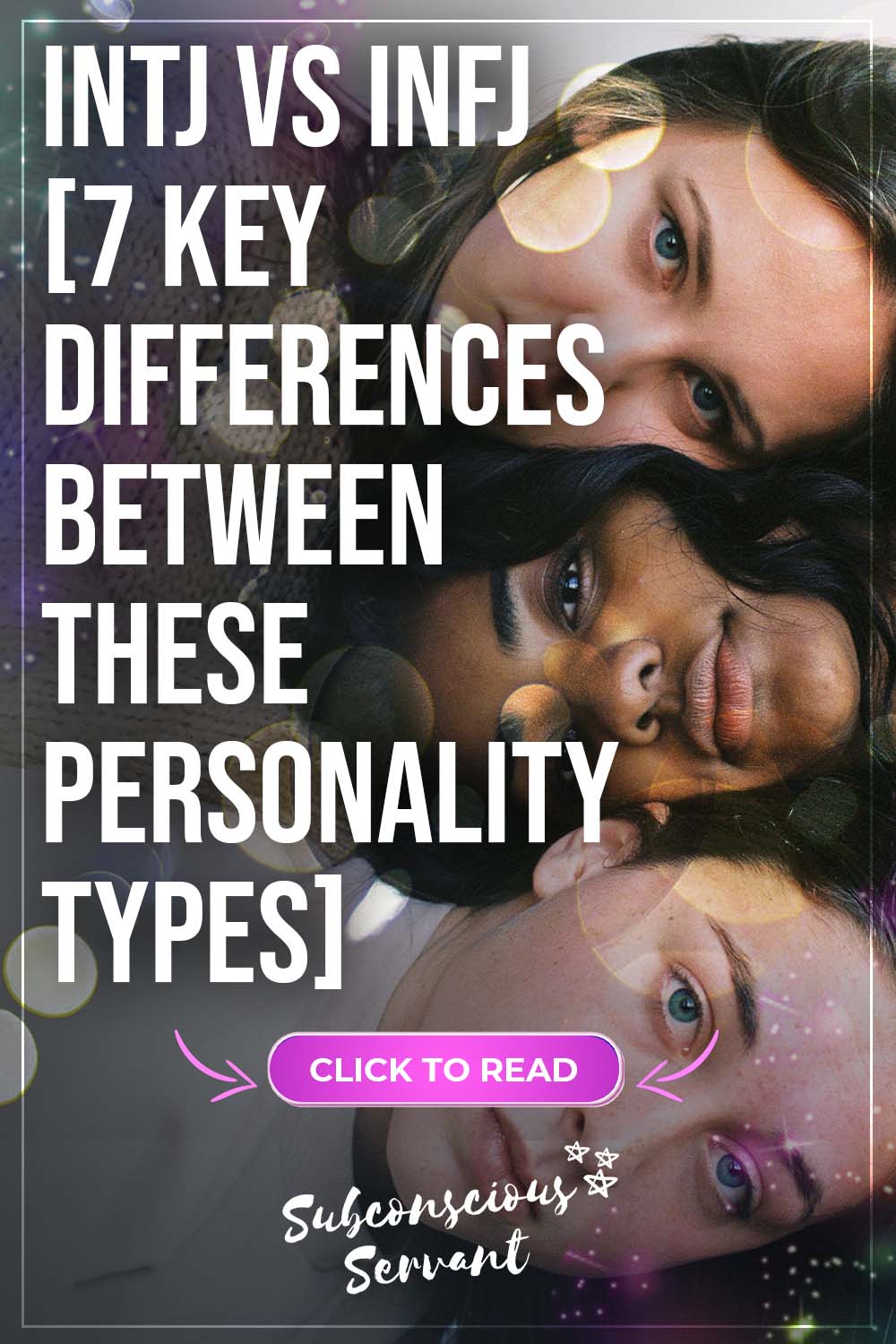 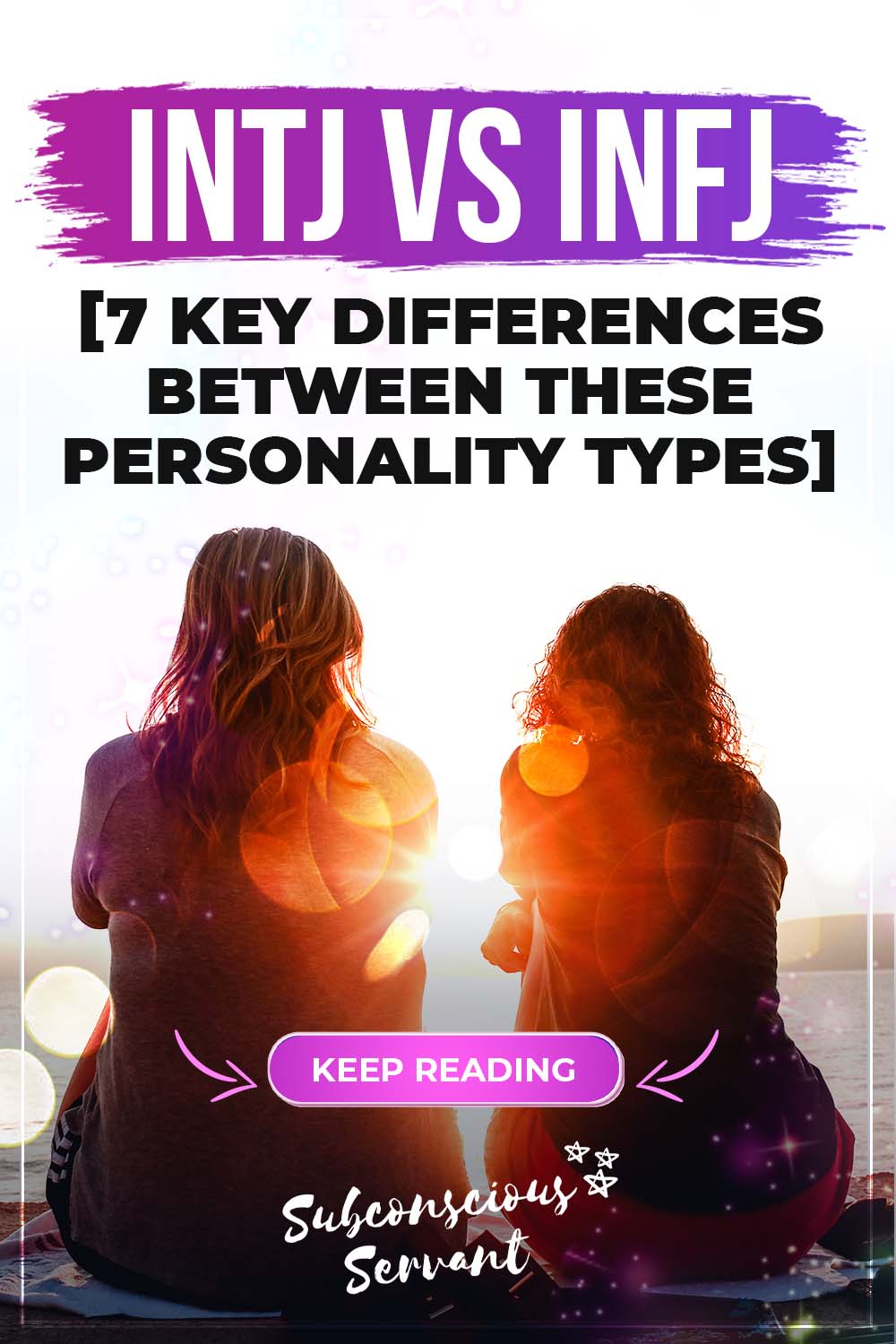