It may be that Blue Quartz is what you’re missing, and you aren’t even aware of it! Some of the qualities of this less common form of Quartz may change the way you experience life.

This post tells you everything you need to know about Blue Quartz, including its meaning, metaphysical properties, benefits, and everyday uses. Let’s get started!

The Meaning Of Blue Quartz

Besides silicon and oxygen, Blue Quartz crystals contain magnesium-riebeckite or crocidolite, which give them their blue color.

Quartz is an ancient substance. The meaning of Blue Quartz comes from the words ‘hard’ and ‘icy cold.’ Those who have ever seen a piece of Blue Quartz crystal will understand this perfectly.

You are inviting the essence of spirit and endless possibilities into your life, home, and body by wearing Blue Quartz.

Throughout history, this has been its meaning, although it manifested in different ways depending on the person who is using it.

Meditation, yoga, and breathwork practitioners will significantly benefit from the metaphysical properties of Blue Quartz.

This crystal resonates with the Throat Chakra and the Third Eye Chakra and is associated with Cancer, Scorpio, and Pisces astrological signs.

In addition, it vibrates to the number 4 and is connected to the elements of Wind and Water.

Below are ten metaphysical properties of Blue Quartz and a few benefits that the crystal has.

1. Promotes A Sense Of Calm

One of the main benefits of Blue Quartz is its ability to promote a sense of calmness.

It is calming to look at blue. A Blue Quartz crystal can be as calming and relaxing as the sea or the sky, both vast and powerful but can also be an epitome of calm.

Blue Quartz crystals are beneficial if you want to cultivate mindfulness in your life.

Blue Quartz brings out self-confidence, ease, and a sense of purpose. Our commitment to the people we love can make us more generous with our time and energy.

It’s no surprise that Blue Quartz is also used to aid clear communication since it can promote a feeling of calm and peace.

A piece of Blue Quartz can help you communicate with someone when you’re feisty and easily say things you don’t mean or if you’re having a difficult but necessary conversation with someone.

Concentration is a metaphysical property that Blue Quartz helps with.

Clarity of thought and concentration can be achieved through Blue Quartz.

Additionally, it can aid in the retention of information, which makes it particularly useful for assisting with studying.

Crystals can help boost clarity of thought, which can lead to the owner recalling forgotten memories.

Concentration is greatly improved by relaxation.

Blue Quartz is, therefore, an excellent companion if you are looking to relax. It will remove any insecurity, fear, or anxiety from you and bring such peace to your spirit that you will feel the weight of uncertainty fall from your shoulders.

Psychic healing can be achieved through the use of Blue Quartz.

Besides balancing all Chakras and aligning subtle bodies, it is also helpful for meditation and spiritual communication.

As a protective stone and a stone for enhancing psychic abilities, it is also a great choice. Radiation and electromagnetic smog are just two types of negative energy that it absorbs.

With its focus on the Third-Eye Chakra, Blue Quartz facilitates the connection to the higher realms, enables one to work with ascended beings, and brings clarity to psychic visions, and enhances dreams.

Metaphysically, Blue Quartz has the powerful ability to enhance organization, self-discipline, and orderliness. This is because it balances and strengthens the communication between the throat and lower Chakras.

When you have self-discipline, you are able to focus more on the work at hand.

Blue Quartz is an excellent crystal to have by your side at the office or when you are studying. It gives you that extra push you need to stay focused on the work at hand.

Personal growth is a benefit that Blue Quartz has to offer.

The Blue Quartz stone inspires tremendous growth in a person. Our path forward is revealed, and it helps us to walk it confidently and gracefully.

When we are at a crossroads in life, when our lives are disrupted or transforming from one stage to another, Blue Quartz helps us stay calm and centered.

It reminds us that each stage of life offers unique opportunities.

Don’t mourn a past era of your life, nor rush into the future in a hurry. Consider taking the time to appreciate the present moment and all that it has to offer.

7. Reduces Our Fear Of The Unknown

A valuable metaphysical property of Blue Quartz is its ability to help us deal with fear and negative thoughts and feelings.

We learn from Blue Quartz that fear is often little more than “incomplete knowledge” and that the way to move beyond fear is to know more about the problem at hand.

Also, it reminds us to ask for support from others when we need it and to trust that good energy will be received. The stone of hope, Blue Quartz, encourages us to listen to our hearts and trust ourselves.

A blue quartz stone can inspire lifelong learning and is terrific for the mind. We learn that we are constantly evolving, constantly changing and that there are always challenges to solve at every stage of our lives.

9. Helps You Become More Positive And Cleanses Your Soul

Among its metaphysical properties, Blue Quartz is associated with cleanliness and spirituality.

This precious stone gives us the color of the ocean along with its many virtues.

In the future, it gives people who are close to this mineral a greater sense of optimism and hope for life despite whatever obstacles may arise.

Having our chakras re-energized periodically is very important.

A Blue Quartz crystal is essential in this context because its vibrations of peace and love can be accessed directly by our bodies through Crystal therapy.

Blue quartz is also used in many other therapies, such as holistic, to soften the circulating energies and facilitate learning, self-understanding, and meditation.

The communication between the physical and spiritual planes is also facilitated by it, according to many esoterics.

How To Use Blue Quartz

There are several different ways in which you can incorporate Blue Quartz into everyday life. Below are a few examples:

You can use the Blue Quartz as a jewel or place it close to your chest and heart if you want to balance your emotions.

Use it as a jewel or keep it under your pillow to balance your mind, strengthen your gifts and awaken your spirituality.

In addition to its ability to be shaped and smoothed into various forms, Blue Quartz is also beautiful when left in a rough, natural state.

There is no need to smooth down a piece of Blue Quartz that you connect with into a perfect shape to wear with pride.

Among the most beautiful pendants made of Blue Quartz are those with irregular stones attached to the chain with silver wire.

Meditation will give you more benefits as you continue to practice. Keep your mind free of other distractions.

You can either focus on keeping your mind clear and blank or imagine the crystal in your hand and the energy flowing into you from the stone.

Around The House And Office

If you want to purify and improve the energy of an environment, leave a large piece of the Blue Quartz in the background permanently.

Use its effects by placing it in the region to be treated, visualizing blue energy coming out of the Quartz, and covering the entire site with a pleasant aura.

By doing yoga, some people enjoy relaxing and connecting with themselves. In addition to the benefits of yoga for the body, the calming experience can also be beneficial for the mind.

Your crystals can help you enjoy a deep and meaningful practice when they are programmed with your intention before your practice.

How To Cleanse Blue Quartz

Blue Quartz can’t self-cleanse, so you need to take action to keep it cleansed and charged. Hence, all of your intended work will be able to yield the best possible result.

It is recommended that you cleanse at least once a month.

It would be great if this could be done more often, but, at the very least, once every lunar cycle would be just right.

A Blue Quartz stone can be placed on top of any self-cleaning stones you may have in your collection. Allow them to lie side by side for 24 hours.

You can also put them on top of a cluster if you wish.

How To Charge Blue Quartz

There are several different ways in which you can charge your Blue Quartz.

The crystal needs to be buried in the garden for 48 hours under the Earth.

You can also leave Blue Quartz under the full moon and retrieve it only the following morning.

The Different Types Of Blue Quartz

Did you know that Blue quartz is uncommon? But there are both natural and manufactured versions of the stone in circulation.

The Quartz found in nature is rarely light in color, so the Quartz we find on the market in this style will be a manufactured version of the natural material.

Many people refer to Light Blue Quartz as Angel Aura Quartz or Blue Aura Quartz. However, you can simply call it Aura Quartz.

Blue quartz occurs naturally as a variety known as Star Blue Quartz. It is a deeply shaded bluestone.

Among the most stunning gemstones found below the Earth’s surface is Star Blue Quartz.

An act was passed in 1990 that made Star Blue Quartz the official state gemstone in Alabama, United States.

Initially, Blue Smoke Quartz doesn’t appear to be blue at all.

As a matter of fact, it seems to be more like a milky white form of Clear Quartz or Clear Quartz infused with your barbeque smoke.

In particular light, the smokiness of the Quartz does refract a very light, unassuming blue hue, which is indicative of the name.

It is said that Blue Smoke Quartz was sent for very specific energetic work.

The goal is to connect the self and the soul directly. An incredibly high vibration is present in this stone, which can only benefit the user.

They have been growing Quartz near Cobalt Ions for years, experimenting with it. As a result, a brilliant cobalt-blue crystal is formed, affectionately called Siberian Quartz.

This stone looks exceptionally similar to Blue Sapphire and offers a more affordable alternative to these precious gemstones.

The fact that this crystal was grown in a laboratory does not mean that it is without metaphysical or healing properties.

The stone’s quartz element is produced identically to how it would naturally occur; the only distinguishing factor in the color structure is the addition of ions.

Today, we learned about the Metaphysical properties of Blue Quartz, the meaning of Blue Quartz, how you can use this powerful crystal in your everyday life, and some of the benefits you get when using Blue Quartz.

In addition to bringing awareness and happiness, Blue Quartz is also associated with independence, spontaneity, vitality, and wellbeing.

By balancing the Throat Chakra and strengthening communication, this magnificent stone enhances organization, orderliness, and self-discipline.

It is unusual to find Blue Quartz in any crystal collection, but perhaps it should be included more often.

With all the benefits of working with this stone, it is clear that they were brought here to make a difference.

Blue Quartz can be found in both natural and manufactured forms.

In the first place, the intelligence required to create these objects was probably sent by the natural conditions of this crystal in order to provide the population with more of these stones. 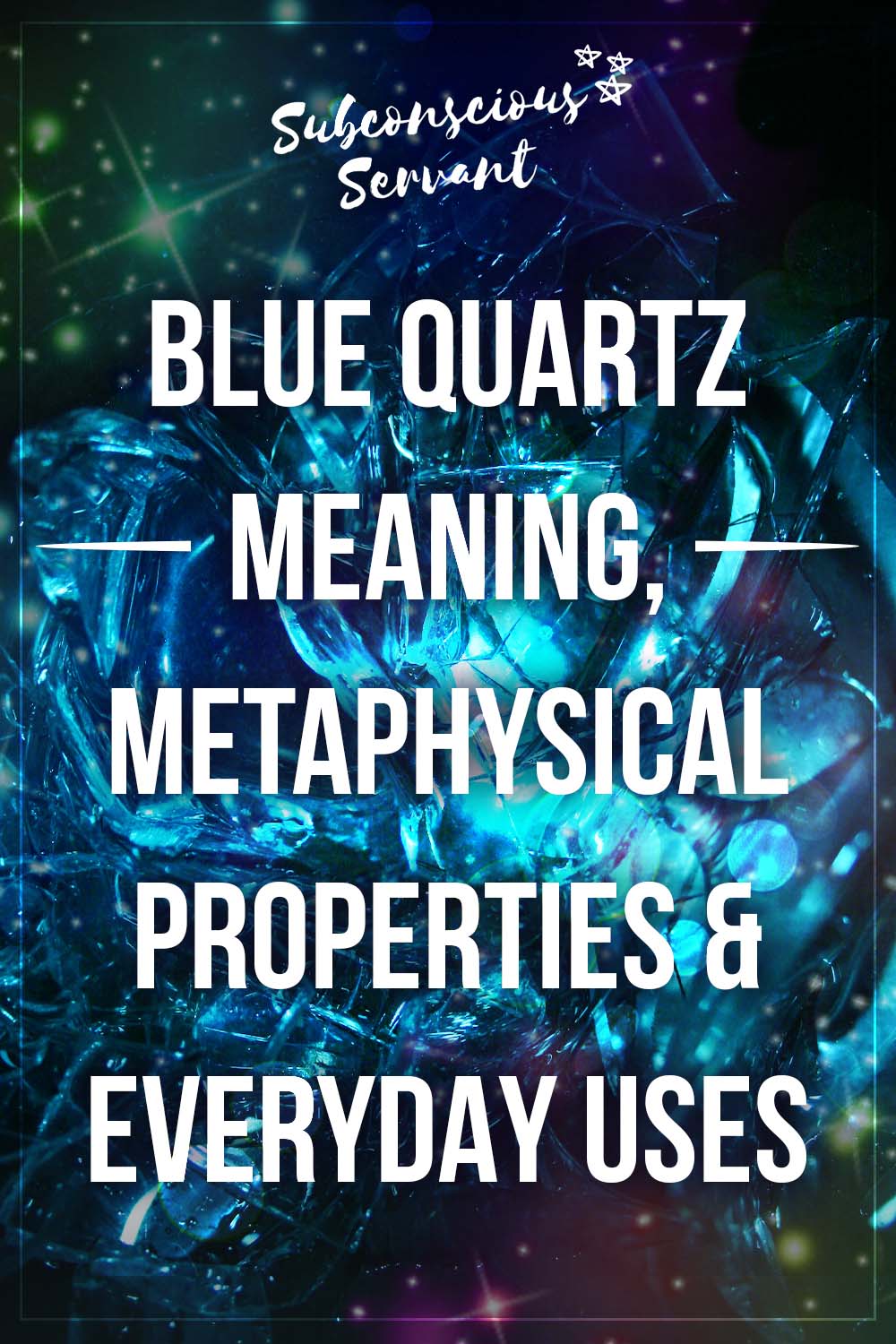