The Earth Empath: 11 Signs You Are This Unique Type Of Empath

As an empath, you feel emotions on a more intense level than others do.

It’s because of this that there are both good and bad sides to being considered an empath.

There are several different kinds of empaths you might not know about, one of them being earth empaths. As an empath, you naturally absorb the emotions and feelings in your surroundings.

As an earth empath, your mood and emotions highly depend on the Earth’s flow and changes.

In this article, we’ll be talking about everything you need to know about an earth empath.

What is an Earth Empath?

Earth empaths are a particular type of empaths that are attuned to the Earth’s changes.

So if you’re an earth empath, you can feel energized when you spend time around nature like the ocean but feel instantly drained when you’re exposed to pollution.

Your mood and energy are deeply intertwined with the world as an earth empath. If there’s a thunderstorm or the moon looks rather lovely for the night, you feel this deeply.

While it’s normal for others to feel this kind of appreciation, it’s more intense for an earth empath.

You might also experience what we call Seasonal Affective Disorder, where you become depressed when days are quicker, like the winter season.

Being an earth empath means you feel the Earth’s love as if it were your own. So when you feel someone or something is hurting the Earth’s air, you also get hurt.

But when the Earth is happy, this joy and happiness radiate out of you.

Interestingly enough, some earth empaths have such a strong bond with the Earth that they can predict natural disasters before they even happen.

Your body tends to act accordingly with the Earth’s changes so it’s possible that before an earthquake, for instance, your body would begin to shake.

11 Signs of an Earth Empath

1. You’re aligned with your body’s changes

As an earth empath, you’re very in tune with your body’s changes that are primarily caused by the environment. As the atmosphere changes, your body changes along with it.

So if you’re always in changing environments, your mood and emotions change as well.

This is also why when there’s pollution in the air, you feel this so intensely that you tend to feel drained, exhausted, and tired suddenly.

However, if you’re in a clear and uplifting atmosphere such as the forest or ocean, you feel more energized and happy.

2. You’re connected to the Universe

You’re very hypersensitive to every sound and movement around you. Whether it’s the sound of the birds flying in the air or the movement of the waterfall, you feel it clearly.

Everything around you is deeply connected to you, and you feel it with every fiber of your being.

In fact, even when you’re far away, you can still feel the movement everywhere.

The health and energy of the Universe surrounding you both energize and drain you, and that’s what it’s like being an earth empath.

This connection can also make you feel less alone, especially when the moon and stars accompany you at night.

This isn’t just classified as the ‘winter blues,’ but it’s genuinely feeling depression around fall or winter seasons.

While ordinary people can also resonate with this, the feelings of an earth empath are more harsh and profound.

You feel exhausted and miserable during winter days, and it’s often out of your control.

Contrary to winter, you feel joyful and uplifted during summer days.

You may often experience people telling you that it’s because of the cold, but you know that there’s a more significant factor at play.

So if you feel your mood and energy levels change drastically according to the weather, you’re an earth empath.

4. You can foresee natural disasters

Your connection with the Earth is so strong that your body can predict when a natural disaster is about to happen. So watch how your body reacts before something is about to happen, whether it’s an earthquake, thunderstorm, or even just a regular storm.

Typically, your body would try to tell you something before the calamity itself.

Even while you’re asleep, your body will still react when a shift occurs on Earth, all because of how powerful your connection is.

5. You enjoy absorbing the Earth’s energy

The environment and atmosphere you’re in affect your mood and energy deeply.

Since you’re so connected to the Earth’s changes, you need to be around nature to recharge your energy.

So you feel much more stable when you’re around trees and forests rather than in an office space or the city.

Your body takes in the freshness of this natural environment you’re in, and your mind benefits from it as well.

As an earth empath, your most profound connection is with the Earth itself, which is why you need to recharge by being around nature.

6. You react to solar flare

If you don’t know what a solar flare is, it’s an intense burst of radiation that causes the Sun to become brighter than usual.

These affect the Earth’s magnetic fields, which is often why earthquakes, tornadoes, hurricanes, and volcanic activity are some of the expected things to happen after a solar flare.

Since solar flares are an intense experience, your body will feel the harshness by experiencing anxiety, heart palpitations, or mood swings.

In other words, your body will react negatively since the Earth is also responding negatively.

It’s even possible to experience mental problems such as depression, bipolar disorder, and panic attacks.

It makes sense that you react more profoundly to solar flares than any other kind of empath.

After all, the Sun is the center of the solar system so as an earth empath, you feel any changes that happen.

7. Your intuition is aligned with the Earth

Our gut feeling is a very powerful thing, but this is especially true for empaths.

You rely on that gut feeling of how others feel, which is why you’re in tune with your emotions most of the time.

As an earth empath, you rely heavily on what the Earth feels. This is why when you’re around nature, which reflects happiness, your mood automatically lifts.

Your gut instinct as an earth empath also makes it unavoidable for you to worry about the state and condition of the world constantly.

So if you feel the Earth is in danger, that worry never goes away.

8. Earth is your medicine

Even if the Earth can make you feel all sorts of negative emotions, this also goes for positive emotions. Your bond with the Earth is so strong that it also acts as your medicine.

Even simple activities like looking at the stars or walking in the grass barefoot can make you feel so calm about everything.

What’s astounding about this is this doesn’t just go for emotional or mental pain, but physical pain as well.

It can’t cure everything, but it certainly does wonders for an earth empath in making them feel better just by spending adequate time around nature.

You need nature to heal, no matter where the source of your pain or discomfort might be.

Especially in a world filled with pollution, consumerism, and the like, nature is the best escape and medicine earth empaths have at their disposal.

9. You enjoy being around water

While all elements play a significant role for earth empaths, this is especially true for water.

After all, the Earth is made up mostly of water, so it’s only natural you feel calm and safe when you’re around any body of water.

Water is more than just a necessity for an earth empath, but it represents life as a whole. When bodies of water move, you feel its calming movement and energy as if it were your own.

Instead of feeling stagnant, this flowing movement makes you feel their energy.

Also, earth empaths tend to enjoy swimming in an open body of water even if they don’t necessarily possess adequate swimming skills.

Just simply admiring the body of water you’re in can make you feel at peace enough. It’s an unexplainable feeling of serenity for an earth empath that they can’t get enough of.

There are both good and bad to being an empath, and this is one of those. An ordinary empath can feel even the most intense pain of those around them.

So as an earth empath, you feel every ounce of the Earth’s pain.

It’s typical for people to feel naturally saddened when they hear negative news such as a disaster on the other side of the world.

However, to an earth empath, it’s highly burdensome and devastating.

It’s as if you feel your heart breaking along with the Earth’s with this disaster and calamity.

As long as the world isn’t at peace, then neither will you.

Even if you try to pretend and go about your day as if nothing has happened, you still regularly feel the intensity of the Earth’s pain.

11. You frequently want to connect with the Earth

You feel most in your element when you’re around nature. When you spend time around the ocean, trees, forests, and the like, this is where you feel most like yourself as an earth empath.

So when you get too overwhelmed with what’s happening with the world or want to feel joyful, nature is the first place on your mind.

You may also tend to eat organic food and eat clean to deepen your bond with the Earth further.

You also regularly practice Earthing by lying flat on the ground and absorbing everything the Earth offers.

Whether it’s looking at the stars or feeling the grass, it makes you feel attached to the Earth.

Summary Of The Earth Empath

In conclusion, an earth empath is a unique empath with a deep connection with the Earth.

Everything they feel is because of the Earth’s changes.

So if the world is currently experiencing a natural disaster, an earth empath would feel anxiety, pain, and even something drastic like depression.

You also feel the most like yourself when you’re around nature, compared to being in buildings and structured walls.

When you’re around trees or oceans, there’s a certain calmness and serenity you just can’t explain. It’s where you feel most connected with the Earth.

You feel everything the Earth does so while it can give you joy and peace, it can also provide you with anxiety and devastation.

Unlike an ordinary empath, your hypersensitivity to emotions is directly related to the Earth’s changes and shifts.

If there’s a calamity happening to the other side of the world, you can feel it as if it was happening to you.

If you want to know more about Empaths check out our other articles here. Alternatively, check out one of the articles below. 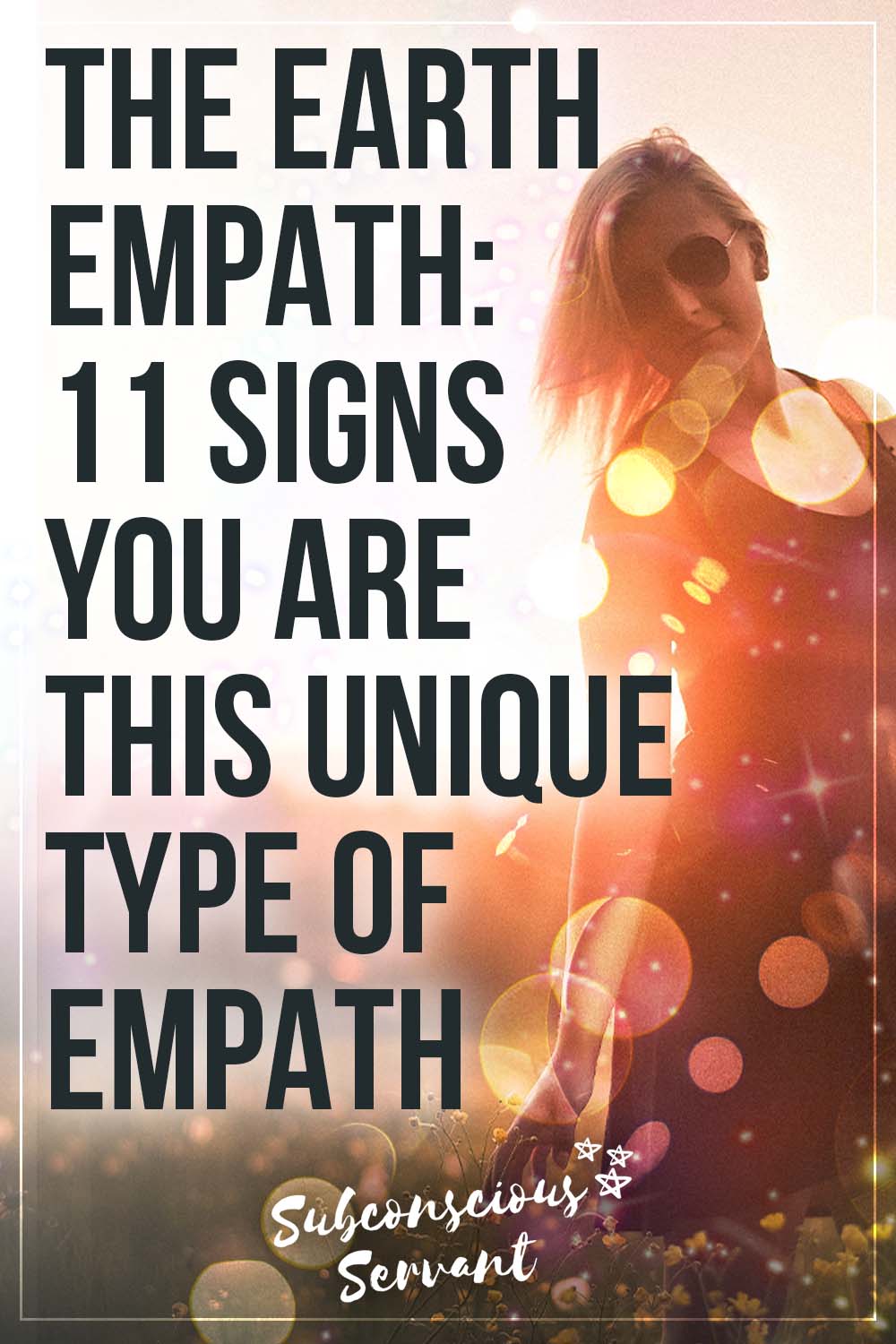 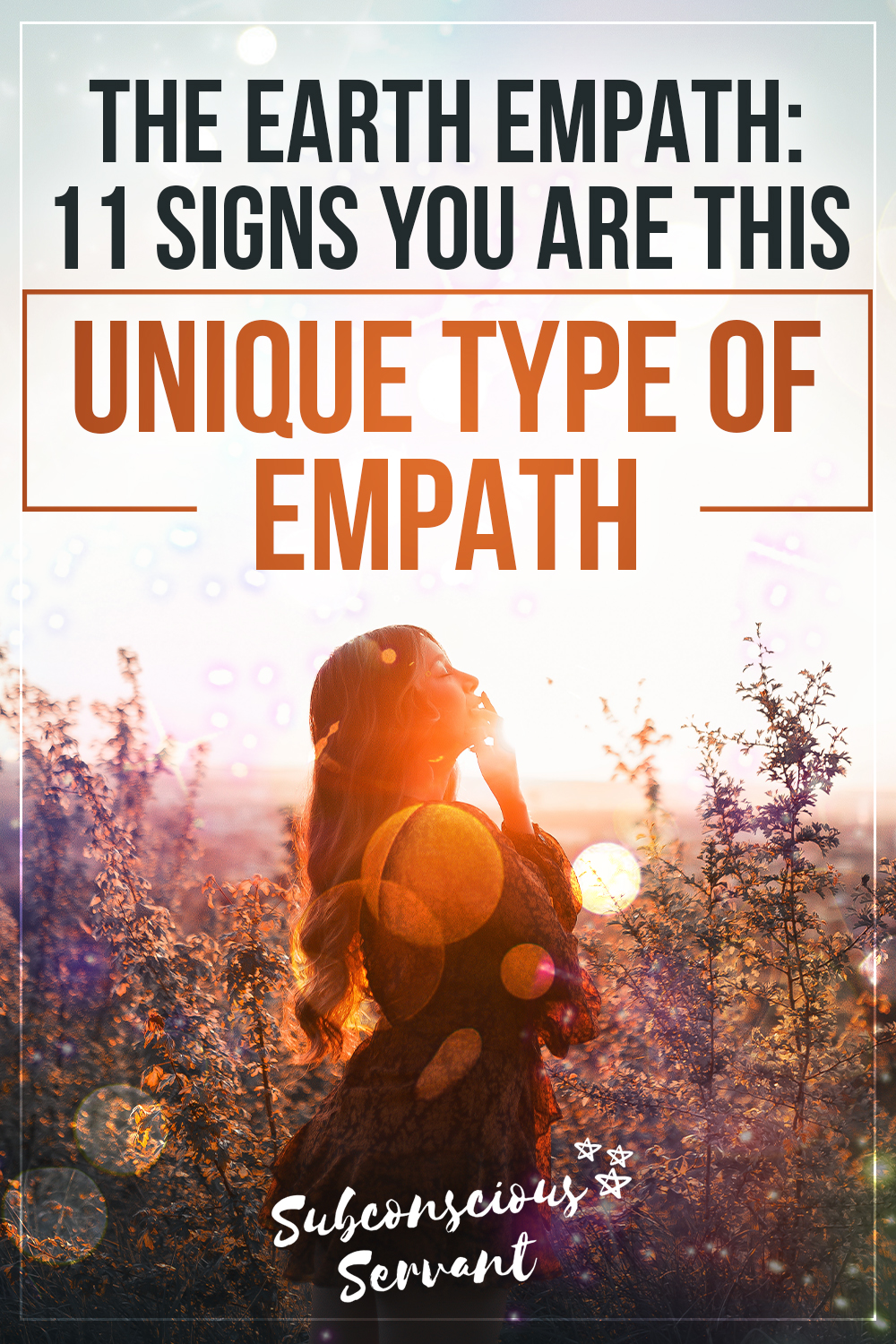