4 Black Aura Meanings [How Negative Is This Aura Color?]

The color of a person’s aura says a lot about their energy levels, their personality, and where they are in life.

Some aura colors are viewed as positive and desirable, meanwhile, other colors, such as black, are usually considered something negative.

In this article, I am going to explain the black aura meaning and its implications, as well as the impact of this aura color and how to change it.

The Meaning of a Black Aura

The color of one’s aura usually shows what type of energy is within them at some point and what they reflect in the outer world.

The meaning of a black aura usually is that person is filled with dark, low-vibrational energy.

This could mean that in the last period of time, you were either going through a tougher time or just got involved with people, things, and places that are low vibrational.

Therefore, the black aura has multiple meanings, but in general, none of them are positive.

What a Black Aura Can Show About Someone’s Personality

First and most commonly it could mean that the person is going through a hard time in their life.

Thus, the black aura is an indication of depression, anxiety, and a tendency to overthink.

Sometimes, the black aura means that all the upset and turmoil are already eroding the person’s soul, and the suffering could, unfortunately, turn them into a “bad” person.

Of course that there is no such thing as “bad” people, but sometimes people manifest harmful behaviors, towards others or themselves, so this makes others perceive them as “bad” people.

This third option sometimes appears when the person has already chosen a dark spiritual path, or maybe a harmful path in life.

Whatever way you put it, the meaning of a black aura is usually an overload of dark energy, even if it’s how the person was born and the dark energy is karma from another life, or it’s acquired through what they’ve done in this life.

Sometimes, the black aura is an indication that the person is going through a very hard time and that they need your compassion and help.

They may be facing karmic difficulties that are beyond their power and they could feel overwhelmed.

When it comes to the connection between the dark aura and the personality, it could also signify an inclination towards the dark side of life, and a temporary or permanent need to explore that.

It could also be an indication of a soul that is currently lost and experiencing a range of negative emotions.

How To Change From a Black Aura

As the aura is a reflection of a person’s energy, the way in which you can change your aura color is to change your energy, which basically means to raise your vibrational frequency.

The following steps can help you change your aura color:

#1. Do Some Energy Healing

To change your aura color from black to a more positive one, start practicing Reiki, Pranic Healing or any form of powerful energy healing that you resonate with.

The purpose of energy healing is to cleanse your aura from the dark energy that is currently stored in it.

Energy healing is perfect for this because it fills your aura with light (positive energy) which can then replace the negative energy.

This is a process that will take time and will require consistency, but in the end, it will be worth it.

Another important step in changing your aura color is to identify what is it that fills you with dark energy.

You need to see what place, situation, or habit has an impact on you and then make the necessary changes in your life.

There could be places filled with dark energy where you are forced to spend your time, people who are very low vibrational and their energy takes a toll on you, or habits such as smoking, doing drugs, drinking too much or getting very angry and violent.

If the dark energy coming over you is karma from another life, then I suggest doing a past life regression to see what karma you need to pay and figure out the best way of doing that.

#3. Develop a Relationship With The Divine

The best way to get rid of the dark energy surrounding you is by cultivating a good relationship with the Divine.

This will ensure that you are Divinely protected by the harmful energies.

Also, by cultivating a good connection with the Divine you will be guided towards choosing what is best for you in all areas of life. This will put you on the right path for you and from there on, your overall energy should elevate naturally.

The best way to create and maintain a relationship with the Divine is through prayer, meditation, and intent.

There are also meditations that help you connect to the Divine and hear the right answer in a situation, or simply share your thoughts and emotions with God.

If you’re trying out one of these meditations you can include visualizing the Divine Source of Energy and a ray of light connecting you to it, helping you receive information and messages.

The intent is another powerful tool that will help you connect to Divine Energy. All you have to do is create within yourself the intent to be connected and guided by this energy, and then allow yourself to be helped.

If you got to the point where you have a black aura, there are probably things in your environment that are affecting your energy.

To give you an example, I was dealing with a lot of bad energy around me once, and  I started to suspect that it has something to do with the house where I was living.

Then, I found out that someone had committed suicide in that house, 2 years before I started living there.

Thus, the house was probably full of demons and dark entities that were drawn to the soul of the person who committed the suicide.

When I moved from that house, things also started shifting for me in a positive direction.

If your aura has become black, my suggestion is to see what person or situation from your environment is contributing to this or bringing dark energy into your field, and then simply remove yourself from the situation.

Black Aura With Other Color Meanings

Sometimes, a person’s aura can have more than one color. This means that in their field there are more energies that are dominant at that given moment, not just one.

If your aura is black mixed with another color, this is good news because it means it’s not all black, and that are still positive energies present in your field.

Depending on what the other color is, you can tell what other energies are present in your field.

Thus, let’s have a look at possible mixes between aura color and what they mean:

If your aura is black and green, it means that amongst all the darkness currently filling your auric field, there is positive energy coming from your heart.

Green is the color of the Heart Chakra, and also the color that a person’s aura reached when they spend a lot of time in nature and nature purifies them.

If your aura is black and green, it means that your heart chakra is currently opening and that can help you heal faster.

The presence of the color green in your aura indicates the ability to love, which can ultimately change your entire aura color, as love is one of the most powerful healing energies in the world.

The color red in your auric field is also an indicator that you are on the right path.

Red is the color of the root chakra, which is responsible for the feeling of security, safety, belonging, and also for the passion and willingness to live.

The color red in someone’s aura can also show determination and an ability to enjoy life’s pleasures.

Thus, if your aura also has red in it, it shows that you have balanced and healed at least your root chakra.

Having your root chakra balanced and open is an important step towards healing, as a lot of people cannot heal because they lack the sense of security, belonging, and emotional stability that a balanced root chakra brings.

Also, if the energy of passion and love for life is present in your aura, it means that you’re not depressed anymore, or at least that you are on the path towards healing from depression.

Purple is another amazing color to have in your aura, especially when it’s changing from black to another color.

Purple is the color of the crown chakra, which is our connection to the Divine and the energy center that allows us to have intuitions and to be divinely guided.

Having purple in your aura signifies a powerful connection to the Divine, a spot on intuition a high level of spiritual awareness.

This connection is very likely going to help you out of the darkness that you are currently experiencing, as you will start having powerful intuitions about what to do and what is best for you.

In contrast to the other colors mentioned before, grey is not such a great color to have in your aura, in general.

However, if you are transitioning from a black aura, it’s still better than having your aura fully black.

In general, a grey aura is an indication that the person is somewhere on the fine line between light and darkness.

If your aura is black and grey, it could show that you’re either becoming darker or healing and cleansing your dark energies, transitioning towards a lighter aura color.

A black and white aura is one of the most interesting aura color combinations that there could be.

There are multiple possible explanations for this mix of contradicting energies in your aura.

The first explanation could be that you were having a white aura, then you’ve made a mistake that drew negative energies to you, and now your aura is transitioning to black.

The second possible explanation for this unusual mix of colors in your aura is that you were having a black aura and living in a low vibration, and then you did something really good so that light entities came near you, and your entire energy is shifting towards the positive end of the spectrum.

The third alternative explanation is that you could be someone who contains very dark and light, positive energies.

This is quite rare, but sometimes it happens, especially to people who are very old souls, and during their incarnation cycle they’ve played with both darkness and light, so now they have access to both energies.

This last category of people are usually people who tend to be undecided about taking the path of light or the path of night, therefore in most of their lifetimes are somehow wandering between the both of them.

A black and white aura could also be an indication that the person is living a strong internal conflict between choosing light or choosing darkness. Let’s just hope they will make the right choice.

If you’ve ever experienced having a black aura, tell us your story in the comment section below, as we love and treasure the raw and authentic stories that our readers share with us!

Remember, your story could someone else’s inspiration or survival guide, so don’t hesitate to share it. 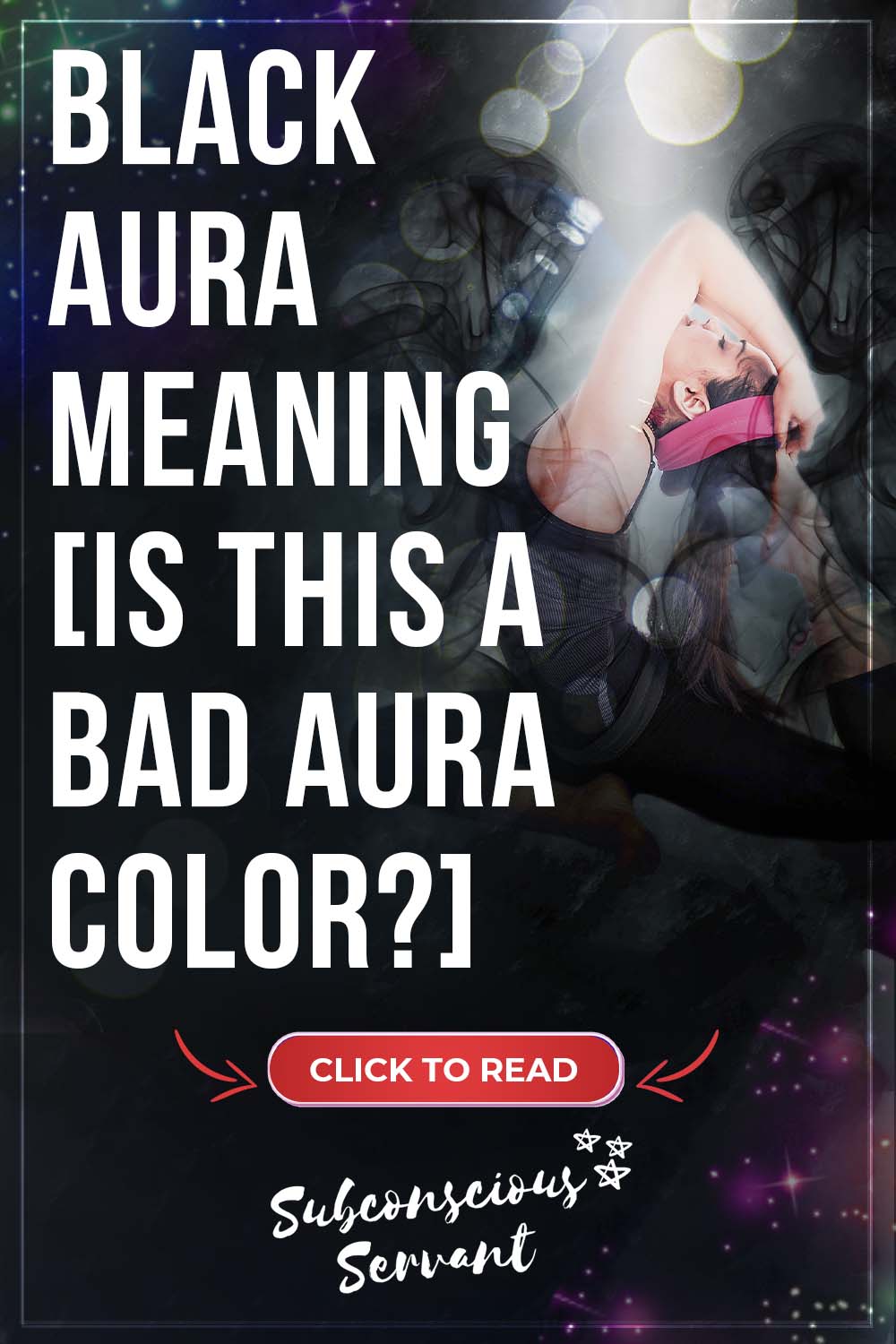